As depressing as Rite Aid's ad is this week, I stopped by this morning anyway, because I wanted to grab some sunscreen for The Bambina, as well as some milk. They were out of milk and their sunscreen deals were just not that great! I couldn't find any Coppertone (BOGO50%) for less than $10.50 a bottle (yikes) and I couldn't find any Banana Boat lip balm to hit the $25 mark.

So I settled for just one bottle, because I needed it. 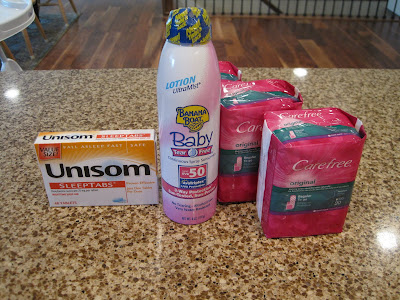 (Also, note that your receipt keeps a tally at the bottom for the buy $25+ suncare/playtex/schick, get $10 +UP. So they can be in separate transactions.)

When I add up the above, it should be $13.23, but the cashier must have scanned one of my coupons in twice, I think? I can't account for it. I'll have to investigate and see if I owe them a dollar. I'm picking up a prescription for The Bambina later today, so I'll settle it up then.

Overall, not a great day. Lets keep our fingers crossed for a better ad next week!
Posted by Annalisa at 1:45 PM