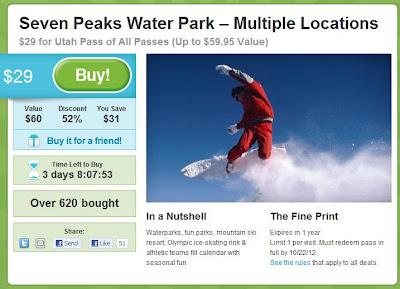 Today's Groupon deal is the Pass of All Passes for only $29! In case you didn't hear about this last year when they were rolling out, this pass includes:


Wowser! I bought my pass last year for $39 (so the price has dropped $10 this year!) and The Bambina and I went to Seven Peaks Salt Lake (formerly raging waters) almost once a week all summer long. It was fantastic! I will buy this pass again just for that park alone. The best part about it was that season pass holders get in an hour and a half earlier than regular day pass guests. It was like having the park to ourselves from 9:30 am to 11:00 am every day. We loved it!

LINK
I don't know if this one has a cap on it, but they've sold over 600 today already!
Posted by Annalisa at 3:48 PM